Towards the beginning of May, the waters around the Balearic Islands begin to come alive. One by one, the shorelines of Mallorca, Menorca, Ibiza, and Formentera cast off their winter colors in exchange for the well-known summer hues of transparent turquoise and cerulean blue. The full blare of the Mediterranean heat has yet to descend, but to the south of Palma de Mallorca Airport, along the seemingly endless palm-fringed avenue of S’Arenal, the bars and shops are already bracing themselves for the impending flocks of holidaymakers in search of sun, sand, and sangria.

In capital Palma, where the atmosphere is carefree and the streets smell like a roulette of fragrant fried garlic and car exhaust, authentic experiences await behind every corner. Looming above everything is the cathedral of La Seu: with one of the largest rose windows in the world, it is a spectacular display of Spanish Gothic architecture.

Just next to Plaça Major in the epicenter of old town is one of the best places to experience Palma’s bustling evening vibe: Bar España is an adrenaline rush for both the eyes and the stomach. Dive in and join the never-ending flux of staff and locals buzzing like bees around the premises, carrying plates of tapas and glasses of beer between the kitchen, bar, and dining tables. Securing a seat here requires patience and persistent eye contact, but things move fast, and, with a little effort, you’ll soon be pointing your fingers and picking out pintxos in lightning pace: one with foie gras, another with sardines and avocado, maybe two of the sobrassada. Before you know it, you’ll find yourself out on the quiet streets again, heart still racing, counting down the hours until the next culinary thrill.

Another landmark close to Plaça Major is Ca’n Joan de S’Aigo, the island’s first ice cream parlor and chocolatier. Over the course of its 300-year history, this establishment with the bygone furnishings and faded floral tiles has become entrenched in the city’s identity. Today, it’s also famous for the ensaïmada: a coiled, savory bun that owes its delectable flavor to saïm, rendered pork lard. Here again, if you’re willing to bear the long lines, you’ll be rewarded with the softest, airiest, and most delicious ensaïmades in all of Palma. And since the pastry originated in Mallorca, the ones at Ca’n Joan de S’Aigo may just be the best to be found anywhere.

Getting cozy with Catalan: The word ca’n prefaces the names of many restaurants, bars, and small hotels on Mallorca. It means “the house of” in Catalan, which, along with Spanish, is an official language on the Balearic Islands, Catalonia, and Valencia.

For a meal mallorquí, the folks behind Café Ca’n Toni serve up no-nonsense dishes in generous portions. Regional specialties such as conill amb ceba—rabbit and onion stew—are sure to open your taste buds to the richness and variety of Spanish cuisine. If you’re in the mood for something more stylish, the tranquil barrio of Portixol is just a short bike ride away to the east. At Cocco by the bay, where bronzed shirtless boys with glistening calves and intimidating shades zip to and fro on rollerblades, expect creative concepts such as sea bass carpaccio with guacamole and strawberries. The bar on the first floor also mixes some quality cocktails.

Sóller and the Valley of Citruses

Mallorca has a small and modern railway network that connects Palma with the inland towns of Inca, Sa Pobla, and Manacor. But for a truly scenic ride, opt for an overnight excursion to Sóller on the Ferrocarril de Sóller. The journey, which lasts an hour, carries the passenger in 20th-century mahogany carriages across the flat plains surrounding Palma before cutting into the mountainous northern backbone of the island.

Around Sóller, countless oranges and lemons dangle like drop earrings from trees. They blanket the town, and it is because of them that the historic Ferrocarril was first constructed. Upon leaving the station, you’ll find yourself in the center of the photogenic Plaça de sa Constitució, surrounded by laid-back cafés, peridot trees, and the beautiful Modernisme façade of the Church of Saint Bartholomew. There is no bustling or rush here. Pull up a seat, watch the leaves rustle as the spring breeze sweeps through the square, and sip on a tinto de verano. 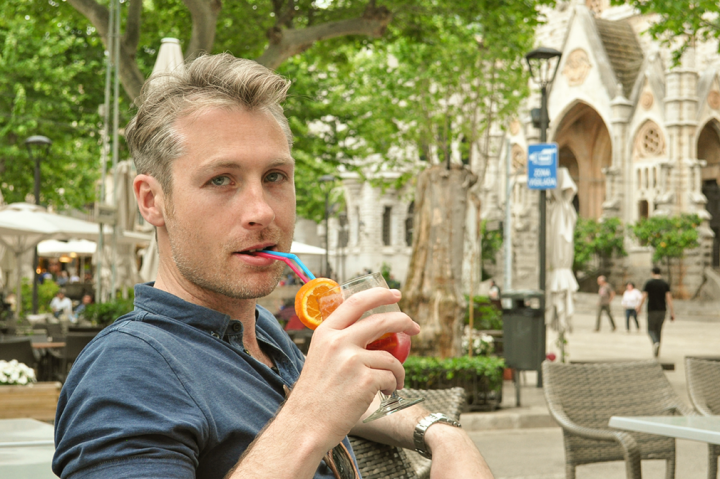 Once you’ve taken in the scenery, Sóller has a plethora of trendy boutiques and restaurants to explore. Sa Granja and Bar Molino are good options if you’re feeling peckish. Ca’n Pintxo, which specializes in finger food and uses fresh, locally sourced ingredients, is also especially worth mentioning.

“Unlike tapas, which are small portions of a larger dish, every pintxo is an artwork in itself. That’s where its uniqueness lies.”

In addition to the train to Palma, the Ferrocarril de Sóller operates an electric tram to the posh Port de Sóller, five kilometers north of town. There are numerous places along the waterfront to sit and enjoy the view, but the most stunning panorama is a 30-minute stroll away, by the cliffside lighthouse on the bay’s eastern rim. Just beside it is the Refugi de Muleta, which marks the starting point of the ten-kilometer walk back to Sóller, should you be up to the challenge. The trail is a part of the Pedra en Sec GR 221, a hiking route based on a network of ancient footpaths guiding the wanderer through rustic backcountry, groves of sun-drenched olive trees, and the scenic dry stone landscapes of the Serra de Tramuntana mountain range.

The Most Beautiful Village

The Serra de Tramuntana hides a trove of arcadian hamlets within its wrinkles, many of which have been heralded as Mallorca’s most beautiful village. Less than an hour’s walk from Sóller is Fornalutx, one such village. The slow bus from Sóller to Palma stops in several others, climbing first up the narrow roads to jaw-dropping Llucalcari by the cliffs before curving its way to the hilltop of Deià and then making a slow descent down the dale to Valldemossa. Wherever you choose to stop, the interiors of the Tramuntana are sure to captivate your attention with their exquisite preservation of a quainter, bygone era. For the final leg of the journey, the bus winds down to the valley floor, where it parts ways with the mountains and continues through the wide open plains towards Palma de Mallorca.

“Majorca”—often anglicized with a j—comes with a reputation. Like smaller Ibiza to the southwest, it is notorious for partying. But whereas Ibiza specializes in pulsating house beats and an ostentatiously upscale scene that’s seen the likes of many an A-list DJ, celebrity, and socialite, the largest Balearic island has historically catered to a different crowd. For decades, its postcard-perfect sandy beaches were Spain’s shiny lures for raking in easy cash from colder parts of Europe: think destination bachelor parties, destination divorce parties, bargain hotels and vacation packages, staggering amounts of summertime consumption, and sunburns beyond recognition. For some, it was a place to avoid at all costs.

But Mallorca is more than the sum of its infinite seafront resorts, inebriated promenades, and crystal clear coves. The island is making a new name for itself—spelled with a double l. Whether you’re looking for relaxation, adventure, or culture, it’s all possible here on this Balearic beauty.

Born in Beijing and raised in the San Francisco Bay Area, I got a taste of just how vast and varied the world was at an early age. Upon turning eighteen and finishing high school, I packed my bags, left for Europe, and never looked back. Currently, I live and work in Zürich, Switzerland, a place I’m happy to call home.

GREG GRÜESST, which in Swiss German means “Greg sends his greetings,” is my endeavor to capture and recount the precious places I’ve stumbled upon and to share their stories and their heritage with you. Happy perusing.