A crown rests gently on its soft cushion of crowberry bristles. Amid the early morning air tinged with the tang of sun-dried kelp and cracked crab, the urchin’s chassis is an echo of a once underwater aria. In the eons since the Vega Islands were lifted from the ocean, soft shales and hard granite have moulded this Norwegian archipelago into a kingdom whose curling hillsides, sharp peaks, white sands, and capricious coasts have enchanted, protected, and, on occasion, terrified humankind.

In the hush landscape of the golden hour, the houses appear before everything else. Budding from the strandflat like a cluster of rosehips, each one is painted in the same carmine hue. Humans have inhabited this edge of the Arctic since the retreat of the last ice floes, some 10,000 years ago. There were almost no other islands apart from Vega then; most of them still slept beneath the waves.

Those who live here today call their home Vegå, but further north, it is known as Vægen. On old maps, its name is as changing as the lapping waves. The Vikings may have referred to it simply as vegr, the Old Norse word for way. Using coastal mountains as seamarks, these early explorers devised fanciful mnemonics of troll chases and beautiful maidens to navigate the Norðvegr, or Northern Way, up to the fish-rich waters of Lofoten.

In the past, the sea was the lifestream: it nourished, it was a source of wealth, and it was the only method of travel. When fishing was abundant, the population grew. When the shoals became scarcer, life ashore waned, too. Ancient chieftains battled each other for rights to the archipelago’s yields of codfish and sealskin. And in the time before winding coastal roads strung the lands together, people rowed from post office to church, school to store. Everything was at the mercy of the sea, and everyone lost someone to it.

The frigid claws of nature pulled the islanders into tightly knit households with clearly defined roles. While the men followed the fish up and down the Atlantic, the women stayed behind to tend the livestock. Every member bore the responsibility of ensuring the family’s survival. Perhaps it was this mutual trust and reliance which earned the inhabitants their reputation as Norway’s friendliest folk. Or so says Randi, my flight-mate from Oslo. Randi has been coming to Vega every summer for the past forty years together with her partner Jan, a local. As we sat and drank our long black coffees on the terrace of their summer home, I learned two things: that a person from Vega was a Vegværing, not a Vegan; and that islanders were truly inviting people, even at 66 degrees north. 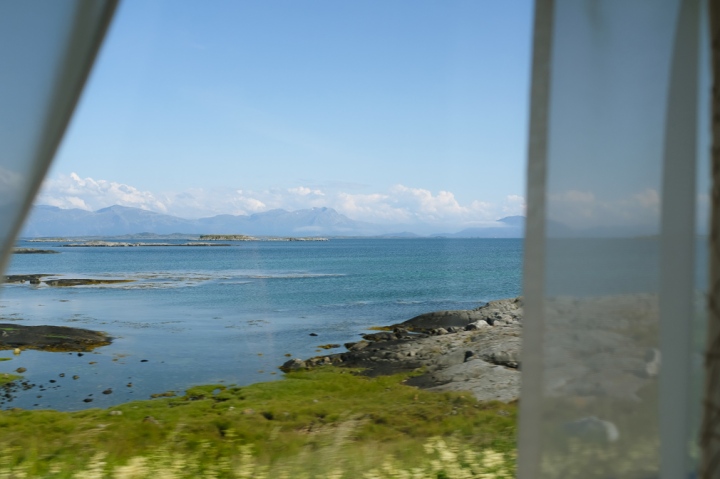 Stirring a generous teaspoonful of sugar into his cup, Jan recounted growing up on the island, toiling on his father’s farm, and the story of his grandfather’s brother who left for America in the early 20th century. Between 1880 and 1925, almost 600 people from the Vega Islands made their way to the Land of Opportunity. New motorized fishing vessels needed less hands on deck, and for families with many children, there wasn’t enough land left to parcel and distribute. Enticing letters from abroad only provided more fuel for wanderlust. Many, like Jan’s great uncle, meandered around New England and the Mid-Atlantic before making their way to the Midwestern state of Minnesota. Gazing at the couple’s refurbished cottage in Kjul, with its pristine white panels and red accents, it’s difficult to imagine that life on the isle could have been anything less than idyllic.

We said goodbye at Sundsvoll, where the road ended against the valley shoulder. Beyond it lay a mass of mountain and scree, impossible to pass except for those on foot. The absence of a ring road on Vega is a small price to pay for protection: this same, unyielding corner shielded the rest of the island and its natural habitats from the worst of the storms and tempestuous westerlies.

Favored by locals as a spot to enjoy outdoor life, several trailheads begin at Sundsvoll, including the Vegatrappa, a newfound pride for the Vegværing. This recently completed wooden stairway rewards those who climb its 2,000 steps with a dizzying panorama of tropical-looking reefs and unparalleled vistas to the inselberg of Søla. On cooler and windier days, the clouds cling to its peaks like tufts of wild cotton. But on a clear afternoon, when the sun is high and the air is still, the jarring cliffs rising high above the sea can be seen all the way from the mainland.

The trail from Sundsvoll to Eidemstranda offers more excellent views of Vega’s satellite islands, as well as a thorough tour of the west coast by the base of the Vega mountains. There are few signs of human presence along the six-hour trek: only a smattering of wooden houses and a lone latrine by the pastures of Vegdalen, and the occasional painted stone to mark the path towards the settlement of Eidem where the road picks up again. The terrain is wild and varied, winding past cobbled beaches and boulder fields, bejeweled bays where the glistening water is as clear as crystal and green as jade, and dense forests where nibbling midges and ravenous mosquitos are ready to ambush at the first drop of sweat. Nature’s heritage, though beautiful, is not always hospitable.

On the opposite end of the island, the fishing village of Nes guards a heritage of a different kind. As early as the 9th century, the archipelago was known as an important center for the supply of a very precious commodity: eiderdown. Although eiders can be found all over the Arctic coasts of Canada, Alaska, Siberia, and Scandinavia, in this part of Northern Norway, they’ve developed a special relationship with humans. Over the centuries, the women of Vega protected these birds and built them shelters in the form of overturned fishing smacks and miniature plank houses. In turn, they collected the unfertilized eggs and any leftover down at the end of the nesting season. This peaceful symbiosis led to the quasi-domesticated fowls returning to the same nests year after year to breed, and tending eiders became a way to make a sustainable living.

Already valued by the Vikings, eiderdown became especially coveted following the Reformation. Knowledge of its rarity, longevity, and unrivaled insulating properties spread far and wide, and large amounts of it were shipped from the islands to cities in southern Norway and exported abroad. Today, it remains a symbol of supreme luxury. More than sixty nests are needed to gather enough filling for one duvet, and in Vega, where the sand, twigs, eggshells, and debris are still sometimes picked out by hand over a sieve-like harp, cleaning enough down for such a duvet can take up to a week.

Born and raised on Vega, Johanna is one of the caretakers of this cultural history. Picking up a pinch of the slate-gray fluff and rubbing it gently between her fingers, she explained its uniqueness. Whereas feathers work to repel water and facilitate flight, down’s primary function is to insulate. Found on the breast and belly of the bird, it is absent of rigid quills and contains instead thousands of wispy fibers which hook onto one another to trap and warm pockets of air. It’s difficult to describe the sensation of a palm-sized clump of eiderdown: completely weightless with an almost imperceptible softness, it may be the closest thing to holding a matterless ball of heat.

On Vega, nature harmonizes with technology, and the old coexists with the new. Despite its millennia-long history, the archipelago is still young by geological standards. New islets and skerries continue to emerge from the sea. Nearby, many of the rustic fishermen’s cottages have been transformed into cushy vacation homes and eco-sensitive accommodation. They stand alongside recent architectural marvels like the dramatic UNESCO World Heritage Center on Gardsøya and the contemporary yet timeless Scandinavian boathouse near Eidem, whose painstaking construction bestow the illusion of having sprouted straight from the bedrock.

The Vega Islands lie off the coast of Helgeland, just below the Arctic Circle. The easiest way to reach the islands is by ferry from Brønnøysund, from where there are direct flights to and from Oslo.

Born in Beijing and raised in the San Francisco Bay Area, I got a taste of just how vast and varied the world was at an early age. Upon turning eighteen and finishing high school, I packed my bags, left for Europe, and never looked back. Currently, I live and work in Zürich, Switzerland, a place I’m happy to call home.

GREG GRÜESST, which in Swiss German means “Greg sends his greetings,” is my endeavor to capture and recount the precious places I’ve stumbled upon and to share their stories and their heritage with you. Happy perusing.